The Noosa Biosphere Reserve Foundation hosted a one-day Koala Symposium in November 2019 to seek key stakeholder input into the development of a program of work that aims to identify on-ground koala conservation, care and research efforts in Noosa. The output of the Symposium is a funding prospectus, to be taken to market by the NBRF with its DGR status, seeking substantial funds for critical on-ground koala conservation and management actions that invest in potential gaps, and will avoid duplication of effort from the excellent initiatives already being implemented and supported by key stakeholder organisations.

Learn how you can support our Wild Koala Conservation Campaign in the Noosa Biosphere Reserve.

The Noosa Biosphere Reserve Foundation together with the University of Sunshine Coast has been integral in leading the development of an innovative research program into better defining koala distribution and genetic diversity across the Noosa Biosphere Reserve. The two projects are providing significant insights into the local koala population distribution and structure. The two projects, together with Noosa Council’s recently developed Noosa Shire Koala Conservation Plan (2016) – a response to the Noosa Council’s 2015 Koala Conservation Policy, support conservation efforts for wild koala populations in the Noosa Shire. In parallel, ongoing efforts from community volunteer care and rescue groups continue to invest significant resources into rescuing, caring and releasing koalas back to the wild delivering an important management outcome.

Despite these efforts, the status of Noosa koalas remains unclear, with reported declines across the greater south-east likely a trend also be experienced locally.

It has been more than 5 years since an initiative brought together recognised koala specialists to Noosa to discuss important management priorities for the species in the region. Since this time and with new information gained from research, an overarching conservation framework, and a willingness from the local community, the Noosa Biosphere Reserve Foundation as a promoter and advocate of “Big Ideas” has an opportunity to invest in the next important step in local koala conservation.

The outcome of the Symposium was a Prospectus outlining a shared set of priorities to reverse the decline of koalas in the Noosa Biosphere Reserve. The report provided key actions needed to provide Noosa’s koala with an environment in which to recover: 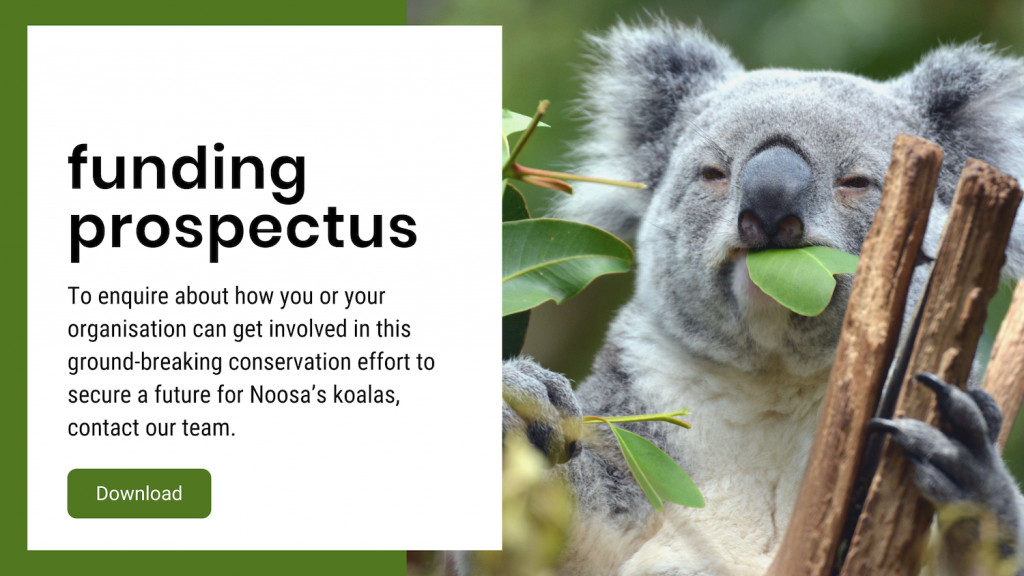